Dubbed by Elon Musk as “the quickest car in the world, with record-setting acceleration, range and performance.” at least that’s what Tesla’s website claims, and taking Elon’s accomplishments and bold statements into consideration, one can’t help but believe that the 2020 Tesla Roadster capabilities are for real and perhaps understated.

Based on the specs below, it automatically defaults to hypercar territory (just purely off numbers) boasting some serous performance capabilities. 0-60 in a neck snapping 1.9 seconds, 250 mph plus top speed, 10,000 lb-ft of torque and a range of 620 miles. One has to wonder if this is the all-around perfect car in the world? Yea, were wondering that also. 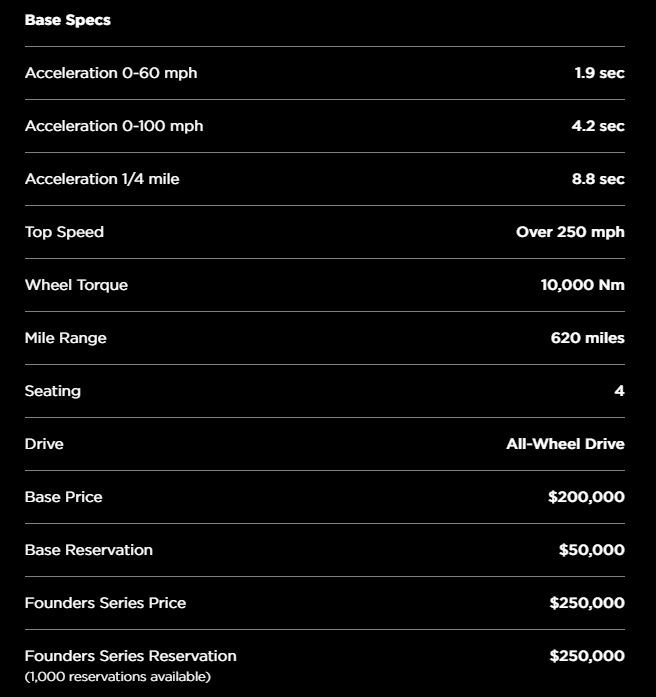 OK so the 2020 Roadsters performance is stacked and you get A LOT for $250k, however, Karma just unveiled their newest concept the SC2 and it too boasts some serous performance numbers. In fact, their stats are rather similar with the exception of the Roadsters range which is double of the Karma SC2.

However, we have to point out that although Karma published the SC2’s horsepower which is 1,100, Tesla skipped out on listing that stat but did list that the car has four seats and is all-wheel drive which absolutely helps with its handling and 0-60 time of 1.9 seconds as those tires all pull at the same time. In case you missed it, below is the official video of Elon Musk introducing the 2020 Tesla Roadster.

So, the 2020 Tesla Roadster is definitely on our car wish list next to the Aston Martin Valhalla and the Karma SC2. In addition, we’re super excited to see it on the road in the near future and the grins on the drivers faces as they pull-away in the jiffy from those flashy and fast Lamborghini’s and Ferrari’s.